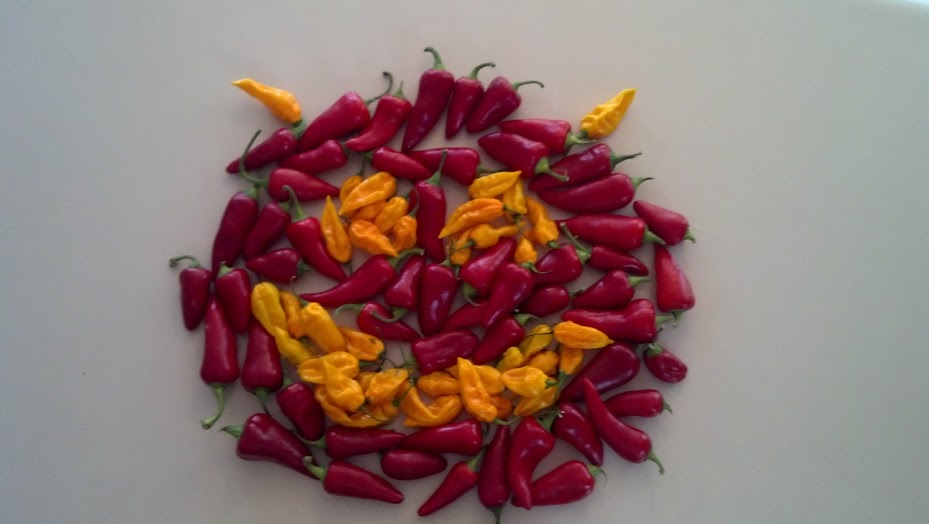 Since our host hasn’t posted any of his delicious projects in awhile, I volunteered to step in with a smoky treat of my own concoction.

The summer heat arrived in AL a bit late this year but it has arrived and I have just the thing to combat it.  A fine sheen of sweat on your forehead provides a cooling effect and this recipe is guaranteed to soak the brow of even the hardiest of spicy food lovers.   END_OF_DOCUMENT_TOKEN_TO_BE_REPLACED 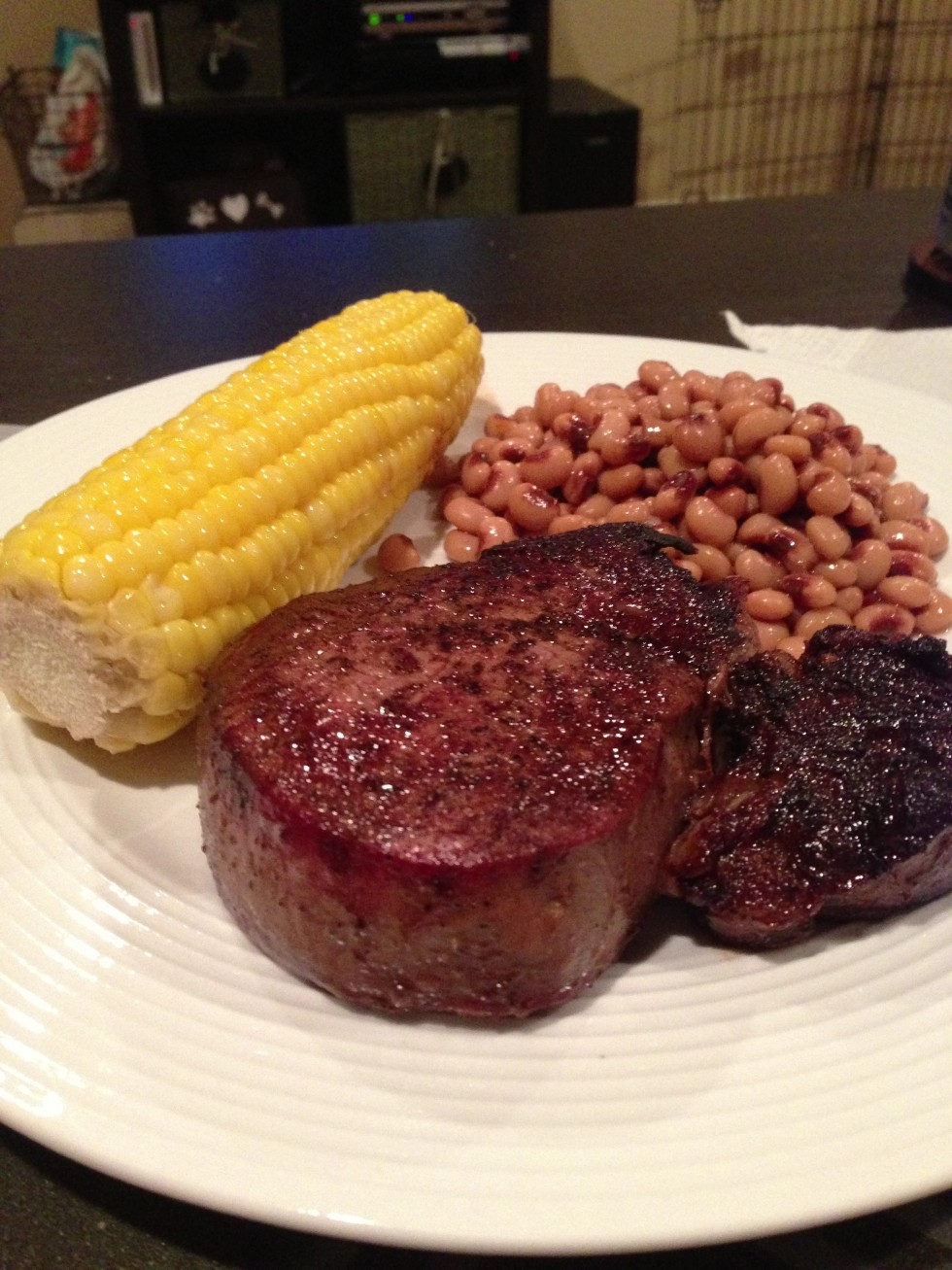 This isn’t my first steak post. But it’s by far the best example I have of cooking steaks recently. And the photos are much better than my last steak cook.

END_OF_DOCUMENT_TOKEN_TO_BE_REPLACED 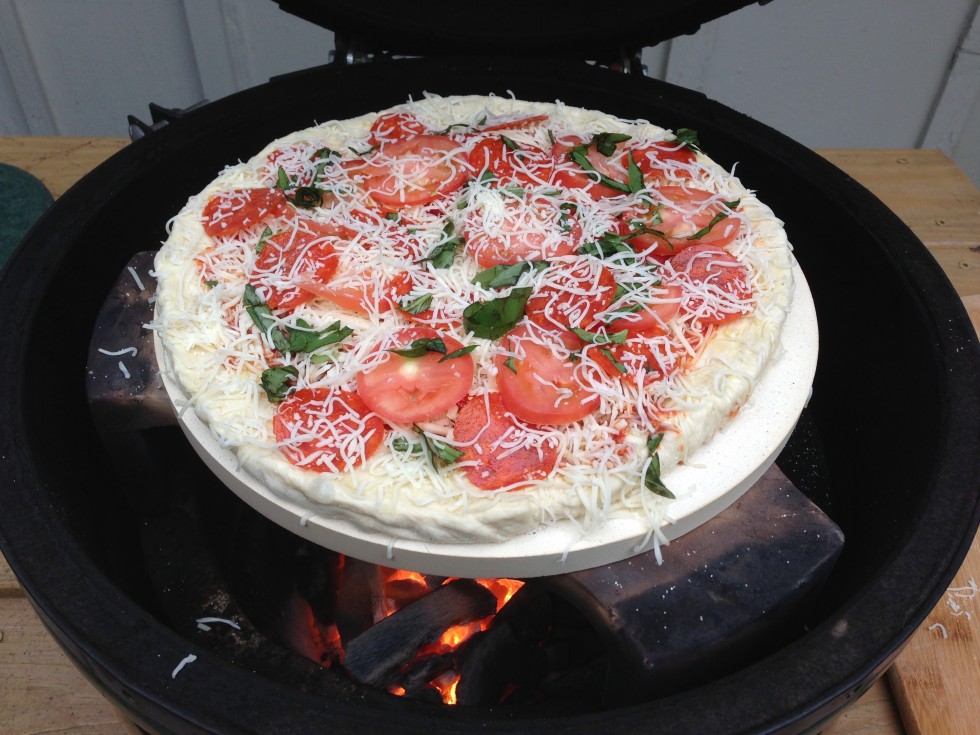 There’s a new favorite meal around the house. I was given a 12″ baking stone for the Egg for Christmas and I’ve generally worked out the kinks of how to make really awesome pizza at home. I tend to pick up fresh balls of dough at the local supermarket, but you can buy the pre-made pizza crusts to save time.

END_OF_DOCUMENT_TOKEN_TO_BE_REPLACED 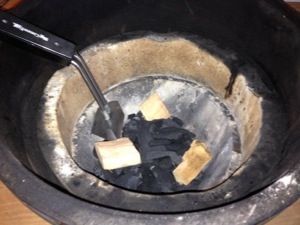 I have a good friend who recently received a Big Green Egg as a Christmas gift. He’s without prep space at the moment as he and his wife have been remodeling their kitchen and I am sad for his Egg as it sits lonely on his patio, all white and pristine. I thought I’d toss him a bone on the burn in procedure for the Egg and realized that, while I had a blog post for indirect heat, I hadn’t done one for direct heat. END_OF_DOCUMENT_TOKEN_TO_BE_REPLACED

This recipe is a composite of several different recipes that my wife found online. She made these last night when we served Sweet Tea Brined Pork Tenderloin to houseguests. END_OF_DOCUMENT_TOKEN_TO_BE_REPLACED

So today comes a new “inspired” recipe. This recipe was inspired by a trip to the Gaylord Opryland Hotel where I ate at the Cascades American Cafe restaurant there and had their Sweet Tea Pork Tenderloin. They served it with finger potatoes and baby greens over a stone ground mustard sauce. Add in a Maker’s Mark Manhattan and it was a pretty fantastic dinner. 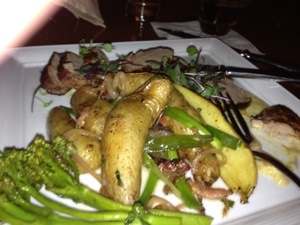 I enjoyed dinner so much (sweet tea, bourbon and pork? yes, please!) that I came home from Nashville scouring the interwebs for a recipe. And I found Saraplicious and her Sweet Tea Brined Pork Loin. When I found out she made hers in the oven, I decided immediately that I was going to have to try making one in the Egg. Her recipe modified to cook on an Egg is covered below. 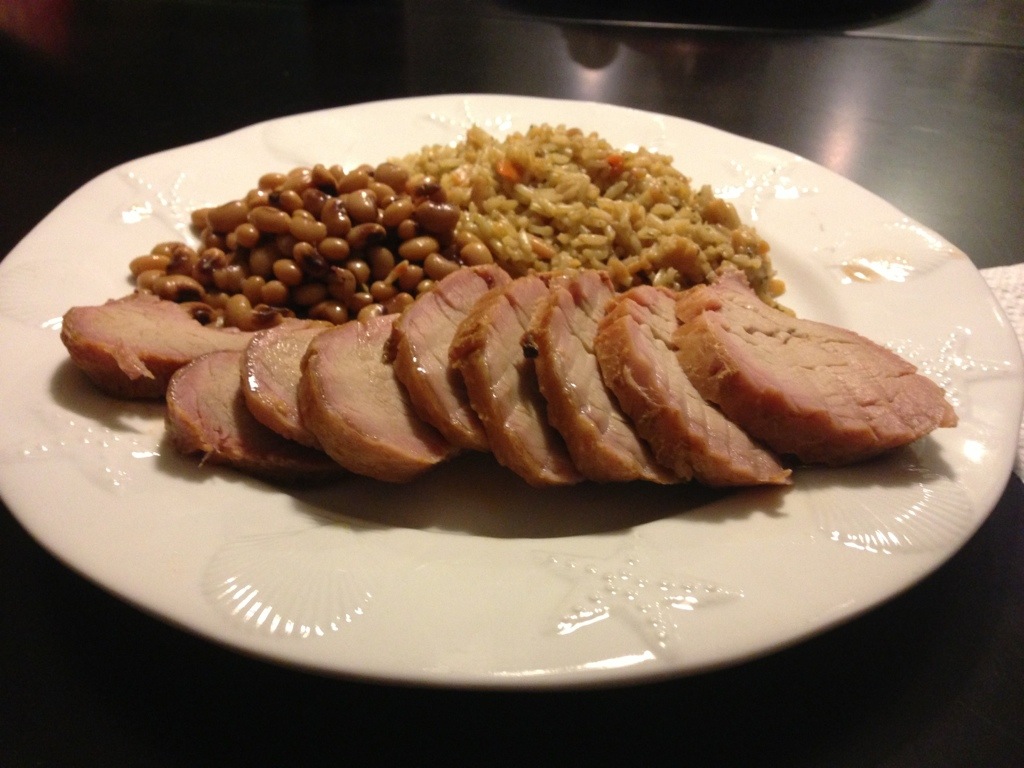 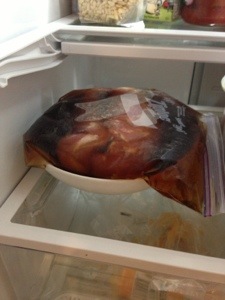 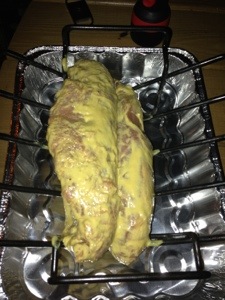 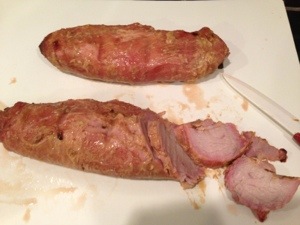 Rather than serving ours with baby greens and finger potatoes, we went with black eyed peas and brown rice pilaf. The pork has a sweet, crisp exterior and retains its moisture on the inside

So, we made it. And the results were better this time around.

For starters, I found a better brining bag. An actual zipper bag made for that. It was much sturdier and larger, so it held up to more abuse.

I left the ice packs on the breasts for about 30 minutes this time instead of 15 to 30. I also iced them prior to brushing on the olive oil, black pepper and garlic powder.

And last, I used a full load of coal. So no trouble maintaining the temperature for the duration of the cook.

The first pic is after about 2 hours. I went ahead and tented the bird with foil at that point. The second is after about 3 hours and 10 minutes, right before letting it rest. After the 15 minute rest, I carved it immediately. 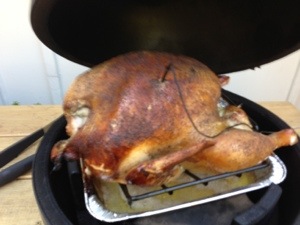 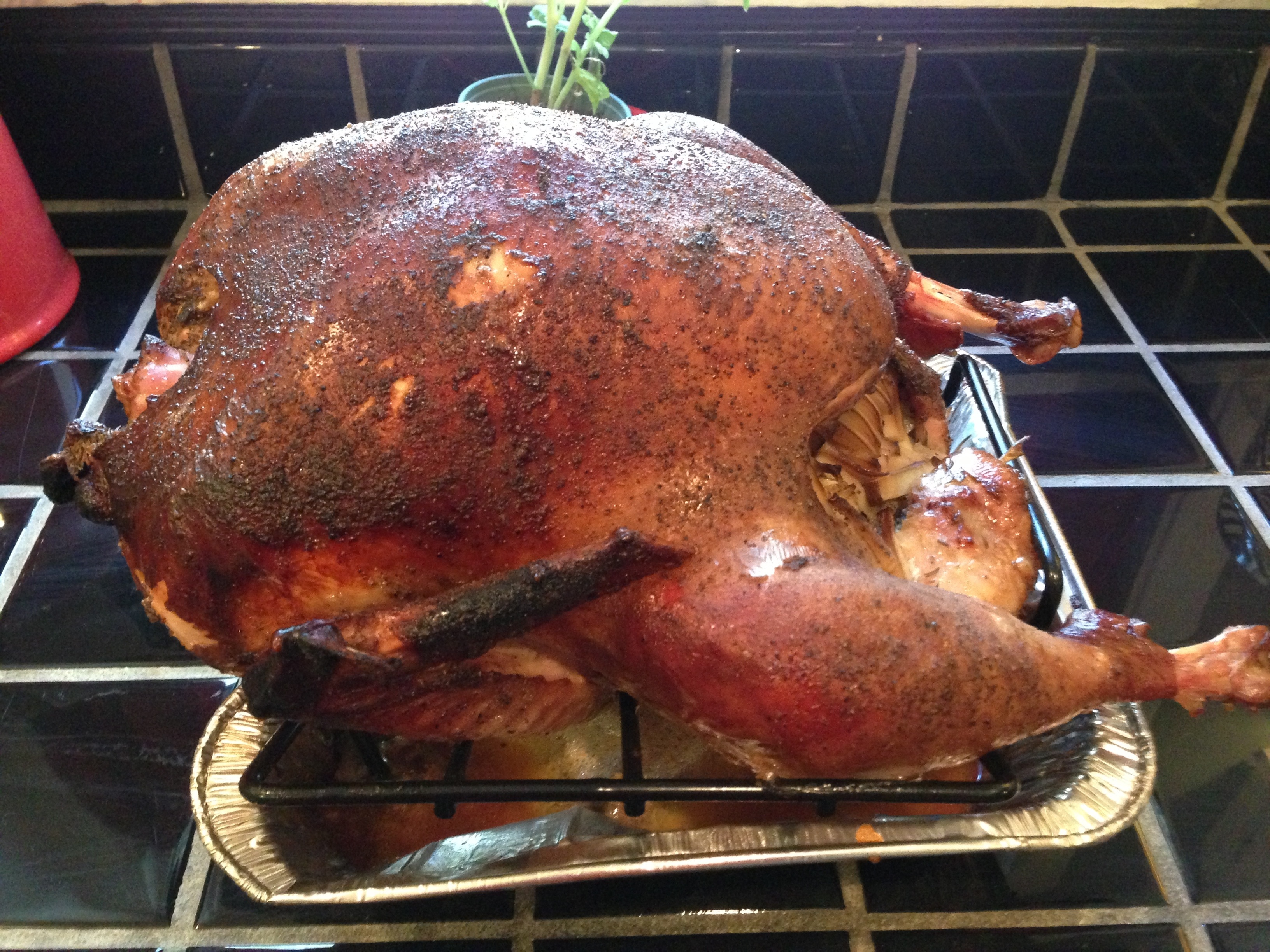 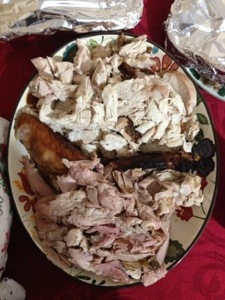 Well, the Thanksgiving turkey has been brining for about 3 hours now. I’ve gone ahead and loaded the Egg with more coal than the last cook. The coal is well above the top of the fire bowl this time around.

I’ve been asked to carve up the bird before leaving the house tomorrow. So, the plan is for a pretty early morning tomorrow. Lunch is planned for 1 pm. To give myself time for the turkey to run long, I’ll probably start the fire by 7 am. 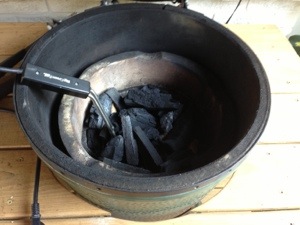 So, as most first tries go, the cook wasn’t perfect.

For starters, the 2 gallon Zip Loc bag leaked into the stock pot where I was brining. It never overflowed, but emptying the pot was a little messier than I planned for it to be.

Also, as it turns out, I didn’t pack the Egg with enough coal and my fire ended up almost out after about two hours. The embers were still burning, but there just wasn’t enough coal to maintain the 350F dome temperature. Luckily, this didn’t end up being a disaster and because I noticed the dome temperature was down to about 300F. Frankly, the turkey would have probably finished fine in the Egg (the ceramic retains heat for a ridiculously long period of time), so I wasn’t in any immediate danger of the grill going cold. It just would have taken longer than 2 1/2 hours. This also didn’t impact the smoke or the moisture of the meat. Meat only takes on smoke until it reaches a surface temperature of about 140F. Since we’re cooking to 165F/180F and it’s been two hours at 300F+ already, we’re already past that point. For Thursday’s turkey, I’ll definitely use more coal so that it finishes on the Egg and not in the oven.

I preheated the oven to 350F and moved the entire assembly, including the probe thermometer from my grill to the oven. My aluminum drip pan barely survived the trip.

About 20 minutes later (near the two and a half hour mark), the audible alarm on the probe thermometer went off. I grabbed my thermopen and checked. The breasts were just shy of 170F. The thighs were about 175. The magic trick with the bag of ice cubes worked, but perhaps I’ll give it 30 minutes next time. I gave it another 10 minutes just to be safe. I tented the drip pan and V-Rack with aluminum foil and let the meat rest. While this is happening, the meat actually continues to cook.

Once I unwrapped everything, I saw the leg meat had retracted from the bone some and the drumstick pulled out of the leg meat with a little bit of effort. I carved up the meat and put it in gallon Zip Loc bags separated into white meat and dark meat. There are also two smaller bags. One for a family member and one for a chef friend who I promised to let try it.

The meat was lightly smoky. The skin was brown and crisp. The meat was not overly salty and not spicy at all. It was a good, balanced recipe. Although I might want to try a cajun turkey sooner or later, this is probably a relative crowd pleaser. Heads up… the house stank of turkey, garlic and onion until I took the trash out.